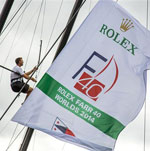 In the wake of the America’s Cup, high-stakes sailing is returning to San Francisco Bay, from October 15-18, when 19 international teams will commence racing for the coveted Rolex Farr 40 World Championship title.

Aboard identical 40-foot yachts, the teams will compete on fast-paced and technically demanding courses on the Berkeley Circle – touted as the best place to sail on San Francisco Bay – with the warning signal for the first race given each day at noon.  The course is off Berkeley Marina, where the breeze is steady and there is less ship traffic than the middle of this busy Bay; current is also less of a factor, although due to its shallow nature, there can be choppy water near the shipping channels and when there is an ebb tide going against the wind.

“It’s one of the most iconic sailing locations in the world,” commented Geoff Stagg, Farr 40 class manager, when asked why the class has chosen to return to hold a world championship here for the third time.  “Nothing beats San Francisco Bay.  There are so many things happening: wind, tide, the bridge, fog.  It’s just a spectacular place to sail.  And of course the wonderful St. Francis Yacht Club, which is hosting the racing, is one of the most prestigious great clubs of the world.”

When asked about racing on the Berkeley Circle, Stagg added: “The tide has a lot to do with sea state and there’s still a lot of influence from the tide down there.  We were out there yesterday and it was blowing 32 knots, and wow!  The tide was going out, the breeze was coming in, and there was some big waves, big action.  Lots of little eddy’s are still there for the tacticians to work and of course the closer you get to Alcatraz the more effect you’re getting from wind and tide, so it’s a very tricky race course.”

California has been the epicenter for competition in these grand-prix racing machines in 2014 as five events, to date, have been held in locations from Santa Barbara to Marina del Rey and Long Beach.  The Farr 40s were competing in San Francisco just last month during the annual Rolex Big Boat Series in order to better prepare for this world championship which has twice previously been held in the City by the Bay (1999 and 2004).

The 1999 world championship was won by a local sailor, Jim Kilroy on Samba Pa Ti; while in 2004, Jim Richardson of Newport, R.I., won his second (of three to date) Rolex Farr 40 World Championship title.  Richardson is back for the 17th edition, chartering the Australian-flagged Kokomo owned by Lang Walker who had to miss the competition due to a pressing business commitment.

With the experience gained having won here before, Richardson explained that “what it takes to win in San Francisco is what it takes to win everywhere:  and that’s to sail very well and very consistently.  There are 11 races here and there’s not a lot of room for having bad races.  You have to sail somewhat conservatively, but you have to sail well.  It’s a great sailing venue for sure; San Francisco is one of the best.”